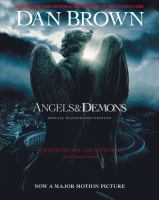 Before The Da Vinci Code there was Angels & Demons, the explosive thriller that introduced the mysterious world of Harvard symbologist Robesrt Langdon. Now Dan Brown's legions of fans can add a breathtaking new dimension to the Angels & Demons reading experience with this Special Illustrated Edition, featuring 150 images of the architectural highlights, religious symbols, paintings, maps, culptures, and locations found in this contemporary classic.

An ancient secret brotherhood. A devastating new weapon of destruction. An unthinkable target. When world-renowned Harvard symbologist Robert Langdon is summoned to a Swiss research facility to analyze a mysterious symbol -- seared into the chest of a murdered physicist -- he discovers evidence of the unimaginable: the resurgence of an ancient secret brotherhood known as the Illuminati...the most powerful underground organization ever to walk the earth. The Illuminati has now surfaced to carry out the final phase of its legendary vendetta against and age-old enemy.
Langdon's worst fears are confirmed on the eve of the Vatican's holy conclave, when a messenger of the Illuminati announces they have hidden an unstoppable time bomb at the very heart of Vatican City. With the countdown under way, Langdon jets to Rome to join forces with Vittoria Vetra, a beautiful and mysterious Italian scientist, to assist the Vatican in a desperate bid for survival.
No Dan Brown library is complete without this lavishly illustrated special edition. No true lover od suspense fiction will be able to resist the exhilarating blend of scholarly intrigue and relentless adventure found in Angels & Demons .
Publisher: New York : Atria Books, 2000.
ISBN: 9780743277716
9780743275064
0743275063

A dorky, "Indiana Jones" -inspired story. Not as great as some may say, but an entertaining read.

Angels & Demons is a mystery-thriller fast-paced novel written by Dan Brown. When the protagonist, Harvard professor Robert Langdon, discovers the resurrection of the Illuminati and their deadly plot against the Vatican, he accompanies Italian scientist Vittoria Vetra in preventing the doom that was about to follow. The author made the book engaging by including several scientific and historic information to pull the reader into the story. The character development was also significant because of the descriptive story-telling. There are many twists and turns that added to the overall action and suspense. I was astonished by how much research was put into the book as everything was factual. It was very hard to put down once you started reading. I liked that I learned a great quantity of information from the book while concurrently being interested and entertained. I would recommend Angels & Demons to any young-adult or adult who is drawn to history, religion, science, and, of course, a good thriller.

This book was amazing! It was fast paced and had some crazy twists and turns. The characters were very engaging and compelling and the plot was well done making this book an excellent read. If you love a good and well crafted thriller with some incredible plot twists, this book is for you!

Another fascinating read by Dan Brown and I cannot wait to read the next one, i was pleasantly surprised at how well the slight, dare i say, romance fit into the factinating plot. Would definitely read again.

Dan Brown grabs you from the get go and drags you along for the ride. Just when you think you can take a breath, he twists the story and you’re headed off in that direction. You travel, you meet people, and you discover secrets centuries old. Excellent book.

this was ok. I read The Da Vinci Code first not realizing it was part of a series and I thought it was better than Angels And Demons. I also thought the hating on catholics was a bit much. otherwise, it was a fun read and a page turner.

Easy read once into.

Just noticed that I forgot to give an evaluation on this book. In fact, it was terrific - much better than the highly-acclaimed "DaVinci Code".

I think Dan Brown's "Angels and Demons," his first Robert Langdon thriller, was overshadowed by "The Da Vinci Code" but it shouldn't be: this one is edge of your seat action with some really twisted surprises. Highly recommend.

"You proliferate weapons of mass destruction, but it is the Pope who travels the world beseeching leaders to use restraint. You clone living creatures, but it is the church reminding us to consider the moral implications of our actions. You encourage people to interact on phones, video screens, and computers, but it is the church who opens its doors and reminds us to commune in person as we were meant to do. You even murder unborn babies in the name of research that will save lives. Again, it is the church who points out the fallacy of this reasoning." (Brown pg. 381-382)

The branded camerlengo… raving for the world to hear…
The Illuminati Diamond… unveiled in its diabolical genius…
The countdown clock registering the the final twenty minutes of Vatican history…
The drama, however, had only begun.

Science and religion are not at odds. Science is simply too young to understand.

The laws of physics are the canvas God laid down to paint his masterpiece.

Sometimes to find truth, one must move mountains.

Science tells me God must exist. My mind tells me I will never understand God. And my heart tells me I am not meant to.

Can you argue two sides of a mobius strip?

Science and religion support the same truth -- pure energy is the father of creation.

Plan to prove neutrinos have mass.

Violence: Some content may not be appropriate for children under 16. - Explicit descriptions of injury and death.

Coarse Language: Some language might not be considered appropriate for children under 16. - Vulgarity, sexual references

PiggyReads thinks this title is suitable for 14 years and over

Saege thinks this title is suitable for 16 years and over

Bazooka_B9 thinks this title is suitable for 13 years and over

noob123 thinks this title is suitable for 15 years and over

Robert Langdon is called by Maximilan Kohler in the middle of the night with an intriguing image that suggests an ancient cult may once again be back into modern civilization. This call brings him into a mad dash to find a tube of antimatter that threatens to level Vatican City in an instant. He succeeds, and in the meantime develops a crush on a murdered physicist's daughter.