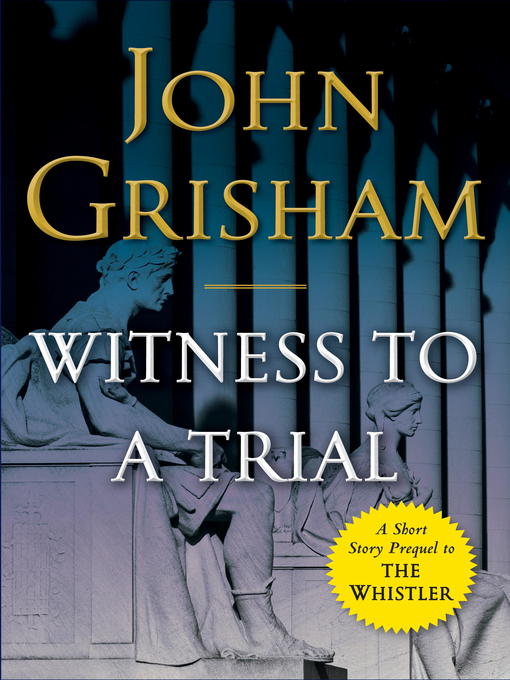 Witness to A Trial

A Short Story Prequel to The Whistler

a--New York Times A judge's first murder trial. A defense attorney in over his head. A prosecutor out for blood and glory. The accused, who is possibly innocent. And the killer, who may have just committed the perfect crime.
Publisher: NEW YORK : DOUBLEDAY.
ISBN: 9780385542579
0385542577

I saw that this story was a prequel to "The Whistler" and thought I should read it before the novel.. It was too short to determine whether it will have value when reading further. Kristi & Abby Tabby

Readers are put inside a Florida courtroom from the beginning to the sentencing of a double murder trial that was pivotal in the development of a Tappacola Indian Casino in Grisham's "The Whistler" which I read before finding this short story prequel. Not a must read but heck, it is a fast read that added colors to those characters who went through the motions in the name of justice and put Junior Mace in death row.

What they had found were two dead bodies, a man and a woman, both naked and both with two shots to the head. They were in her bedroom and apparently had been caught in the act. She was married to someone else, as was he. At some time between 2:00 and 3:00 p.m. on January 17, 1995, the defendant, sitting right over there at the defense table, had allegedly barged in and found them. He was married to the woman and knew the man well.
===
Murder alone does not trigger a capital case. Murder plus something else is needed—robbery, rape, kidnapping, killing a cop or a child—the list was long.
===
The Judge. Her name was Claudia McDover and she was forty years old. The previous year she had defeated an eighteen-year incumbent by a thousand votes. This was her first capital murder case; indeed, it was her first murder case of any variety.
===
The crime-scene photos, regardless of how grisly, were always admitted.

If he was to be given the chance to tell the truth, then he would not be denied.
===
The problem with snitches was that they often recanted and changed their stories. Delgado knew this well, as did the men he worked for.
===
Digger cleaned up nicely and managed to seem relaxed as he prepared to unload an hour’s worth of fiction to the jury.
===
The white man’s notions of justice were baffling. How can they allow a self-confessed and self-serving criminal like Todd Short to put his hand on their Bible, swear to God to tell the truth, and then spin such fantastic lies? What system of justice allows a seasoned convict to repeat statements he swears he heard in a jail cell the year before?

They viewed gambling as nothing more than another white man’s curse, and they had narrowly won... the casino would be built. Prosperity was just around the corner, and this pleased the Chief. Perhaps in a few years the money could heal the divisions. With money they would build nice homes and fine schools, plenty of roads and parks and clinics, and every Tappacola would share in the wealth. The casino would lift them out of poverty and reunite his tribe.
===
Losing his mother was incomprehensible. Losing his father would be the end of the world.
===
He denied owning a handgun and testified that he did not know a single Tappacola who owned one. It was not part of their culture. A few of the men hunted deer for food, but no one in his family did so.

There are no age suitabilities for this title yet.

There are no summaries for this title yet.